Veronica Tyrrell, a founding member of HMC honored by the Town Council of Halton, dedicates a park in her name in Oakville 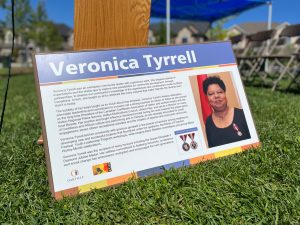 Veronica Tyrrell is a renowned community leader of Halton. She was a distinguished community trailblazer with an admirable generous spirit. Tyrrell in her tenure explored a plethora of novel prospects for community development and believed in celebrating diversity. She was an exemplary leader who tirelessly advocated for inclusion.

Veronica Tyrrell was one of the founding members of HMC. She was extremely instrumental in laying the foundation of HMC and was a pivotal flag bearer of our organization. One of the strongest pillars of HMC, Veronica built a team based on her ideologies of making a hospitable community in Halton to welcome immigrants from different parts of the world.

Recently, the Canadian Caribbean Association of Halton (CCAH) acknowledged the passing of the great veteran, on October 7, 2018. Veronica was a long-standing President of CCAH and was actively involved in working for the welfare of the Caribbean community.

In order to mark her legacy and honour, His Worship Mayor Rob Burton proclaimed August 27 as Veronica Tyrrell Day in Oakville, the day in 2022 when the Town formally dedicated a park in her name: Veronica Tyrrell Park, 3183 Buttonbush Trail, Oakville.

It was a pleasant sunny day that started with a welcome message given by the mayor of the city Rob Burton. CCAH Steel Pan performed the national anthem, the sound was reverberating. A land acknowledgment was presented by Ms. Angela Bellegarde. The park dedication purpose and proclamation reading was presided by the Mayor.

Rob Burton, Mayor along with Andrew Tyrrell, son of Veronica Tyrrell unveiled the plaque and read the inscription. The closing speech was given by the Mayor